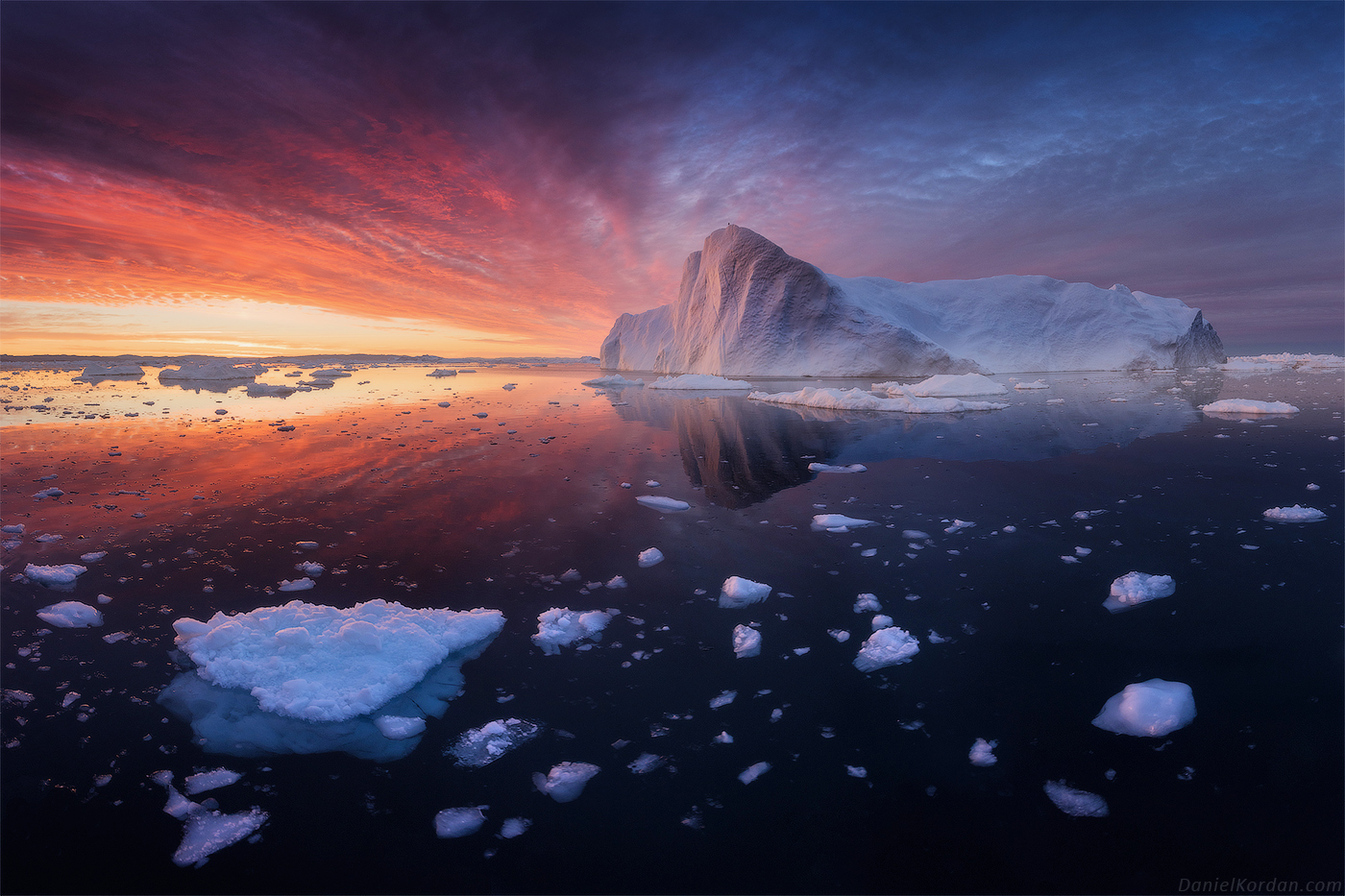 We invite you to join our unique expedition on “Peter-1” yacht to Greenland. We plan to sail through the eastern fjords of Greenland in summer and to sail near the legendary Scoresby Sound. This is the part of our long expedition through Spitsbergen, Greenland, South America (Chile fjords) to the Antarctica.

The number of people is strictly limited – only 6 people for this beautiful part of our expedition. The schedule of the trip is the same as for photo tour. We work with our material at night and rest and check the photos or go to some small tracks on Greenland shores at the daytime.

The classical tour to Greenland differs a lot from our style. You’ll be offered to sail on “zodiacs” only during some hours but we can always sail and hunt the light and best perspectives during the whole night and to stay mobile at the same time. The previous experience has shown that a good team and a maneuverable yacht give an incredibly beautiful result. Our timetable is more or less free. Ideally we want to go round Scoresby Fjord but that’s not the main goal. The main goal is to shoot beautiful icebergs, fjords and high Scoresby Sound peaks. That’s why we’ll work out our everyday timetable taking into account ice situation and the weather.

The advantages of travelling by arctic class yacht are obvious: big cruises are enormously expensive (about $10,000 usually), the yacht is more mobile and we can listen to every participant’s opinion what is difficult in a team of 30-50 people on board. The big ships can scare away the animals and can’t be as mobile as we are. The yacht has both rigs and a motor. Moreover, we have a quick and maneuver “Zodiac” which can be launched at any moment to get closer to the animals or to go ashore. Safety measures’ questions are paid special attention: satellite phone, navigational system and ice maps.

So what is the fjord Scoresby? Astonishingly, this is the longest fjord system in the world! A fjord has a treelike structure and the longest of such branches is 350 km! Moreover, it’s one of the deepest fjords in the world – it was formed because of tectonic hollow’s flood. The fjord was explored by whale men William Scoresby and his son and they were the first to map it in 1822. Many people think that the biggest fjord in the world is Norwegian Sognefjord but that isn’t true. Sognefjord is 204 km length. High granite and basalt peaks dominate above Scoresby making it incredibly picturesque. The water is protected from the wind that’s why you can often see icebergs’ and peaks’ reflection; there is no rocking or choppiness. There is one more Scoresby’s peculiarity – the animals’ world is unusually rich even for Greenland. The lands are quite fertile and the water is open almost all year round, so you can see deer and musk-oxen, arctic foxes and lemmings here. Ringed seals, bearded seals, harp seals and Atlantic walruses leave in Scoresby waters. We’ll see humpback whales almost every day and we may also see white whales or narwhales. The colonies of migrating birds up to half a million fly here. These can be little auks, Arctic terns, herring gulls, Polar loons and many others.

“Peter – 1” yacht is an arctic class yacht with a steel jacket equipped with modern navigation system. You can use the kitchen, WC, shower, the main cabin and living rooms – one single cabin, two double cabins and a bunk room. The yacht’s team is 4 or 5 people + 6 photographers on board. There is one zodiac (a motor boat) on the yacht. There are 220 V receptacles (they are sometimes turned off), freshwater supplies (700 + 200 liters). We went on Greenland photo tour with “Peter-1” team (usually it’s 4-5 people) brilliantly and several years ago the team set a world record and went on the Arctic world-tour in one season.

The start is August, 10 from Akuyreyri, Iceland. We have ordered a charter airplane for our small group from Iceland to Greenland. Our yacht will be waiting us on the arrival of the airplane. The fjord is very calm, so you need no worry about waves: we will not go to the open sea. Once we are on the yacht we will start sailing towards inner islands and fjords of Scoresby Sund.
The charter plane back from Greenland lands in Reykjavik at 20.25, 17 August. 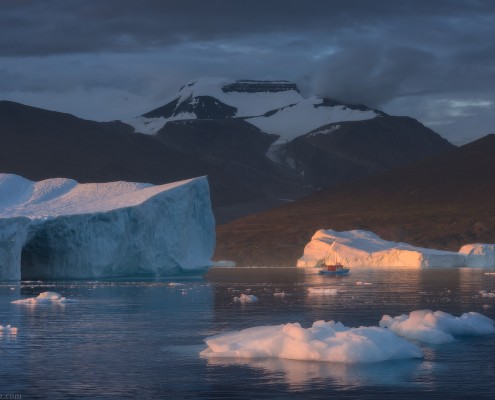 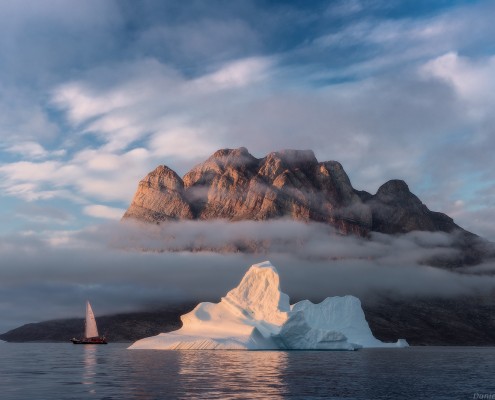 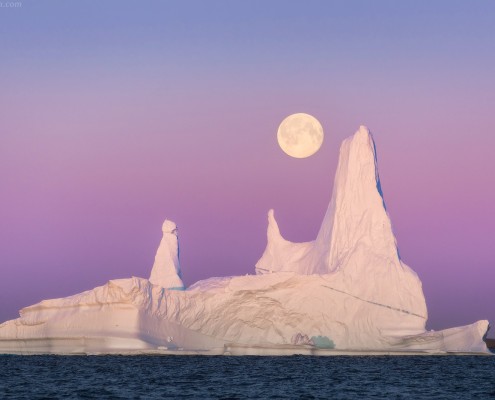 On our way we’ll see enormously big icebergs and almost for sure we’ll see their most fantastical forms: arcs and towers and many others. Today we can get to Danmarks Island inside of Scoresby fjord. 200 years ago the Inuit left their settlement here. Føhnfjord that is located not far away is very picturesque from the shores or from the yacht. The third biggest island in Greenland is located in this fjord. In this fjord’s waters the unbelievably sharp basalt cliffs go down. We’ll go to Hare fjord through Rødefjord. 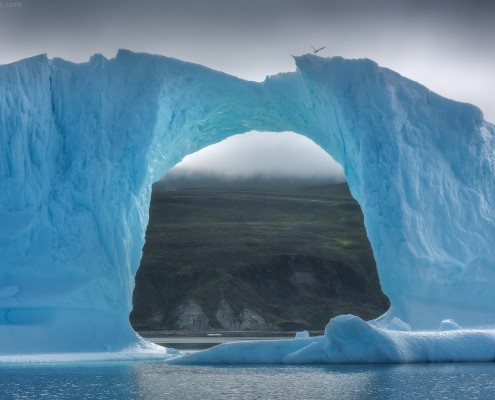 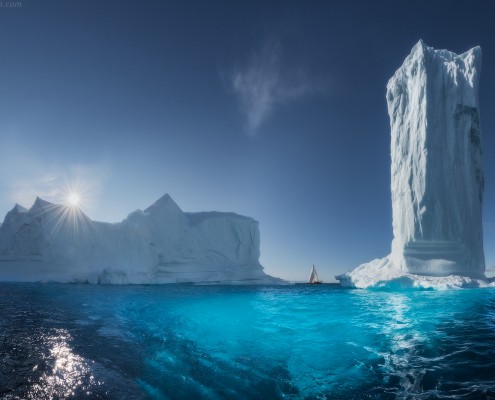 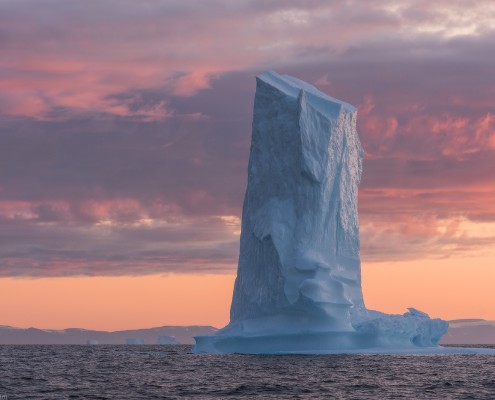 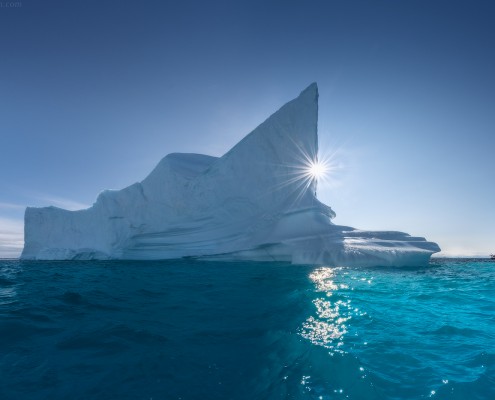 Greenland ice shield is the second biggest in the world except Antarctic. Scoresby system consists of many big glaciers from Greenland shield. These days we’ll sail into 2 gorgeous mini-fjords – Hare and Rypefjord. It’s here where you can see the most splendid Scoresby icebergs. Many of them are pure blue pieces of ice which have just broken away from glacier’s terminal. 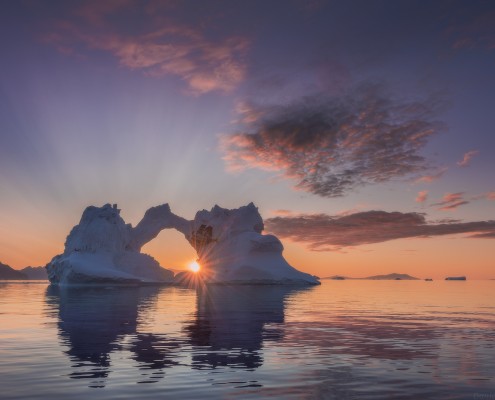 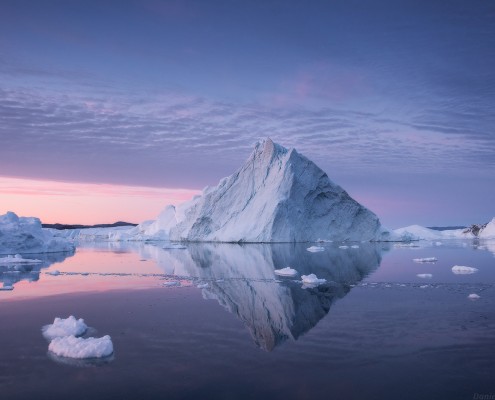 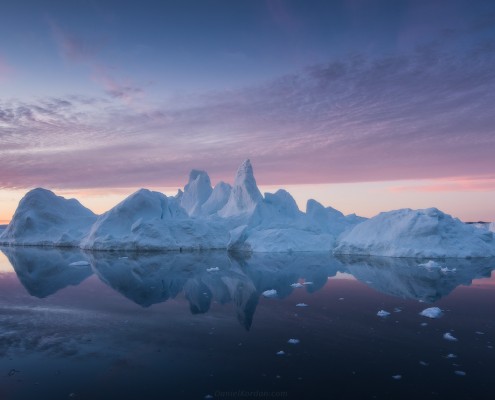 This day we spend travelling by land: we hike on the beautiful Harefjord shores. Muskox graze here, polar foxes and lemmings can be seen, eagles fly above the ices. 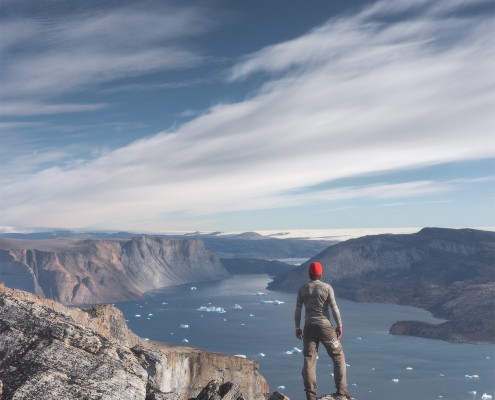 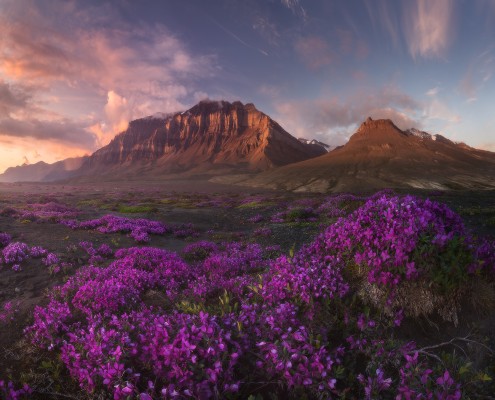 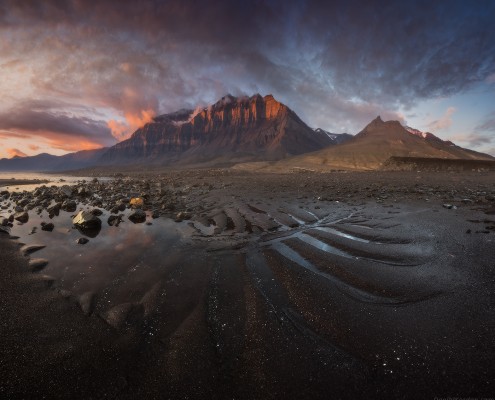 The sailing continues eastwards through the awesome Øfjord. We’ll see high mountains resembling Patagonia: granite peaks rise 200-300 meters above the mountain range and go high into the sky. We can sail close to the glacier front here. 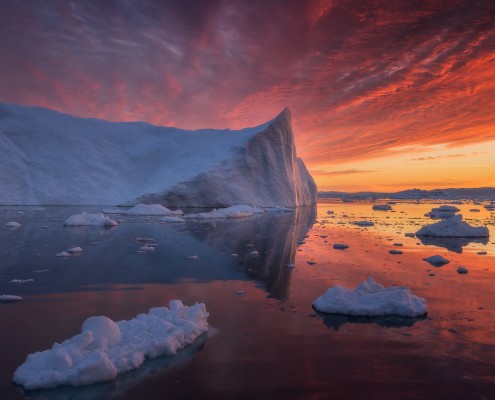 Today we sail to Bear islands and anchor in a tranquil and picturesque Jytteshavn. Bear islands is a magnificent archipelago consisting of more than a dozen of small islands, many of which have a beautiful sharp form. 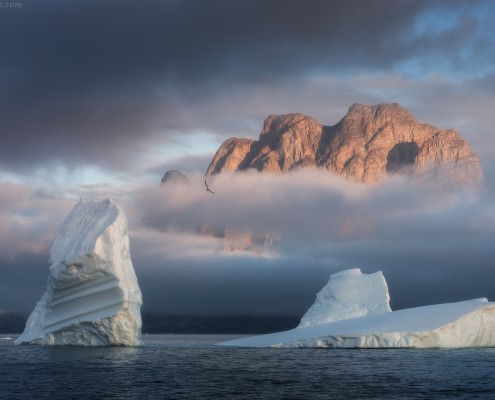 We sail between Bear Islands and Milne land, leaving some time for small walks and shootings with a tripod from the land. 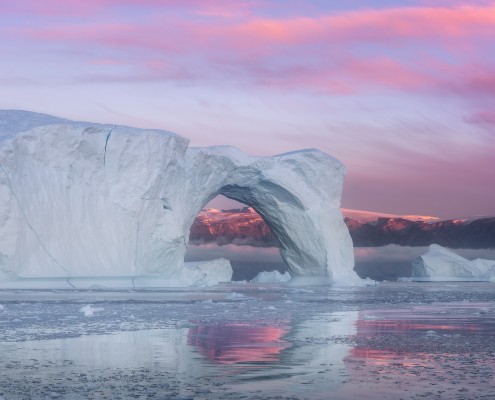 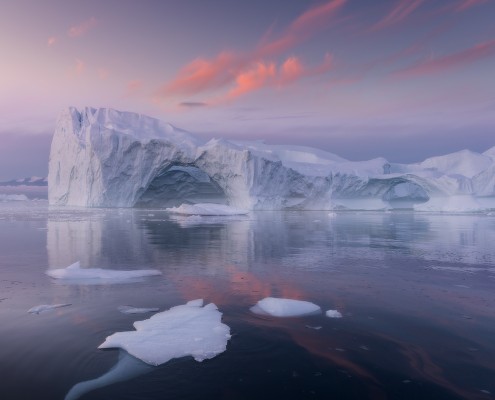 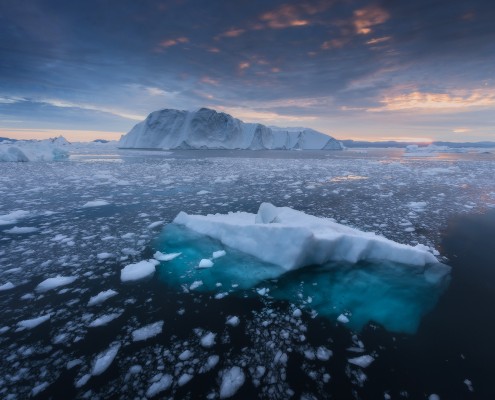 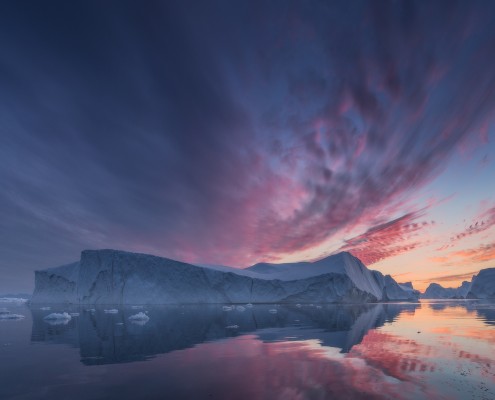 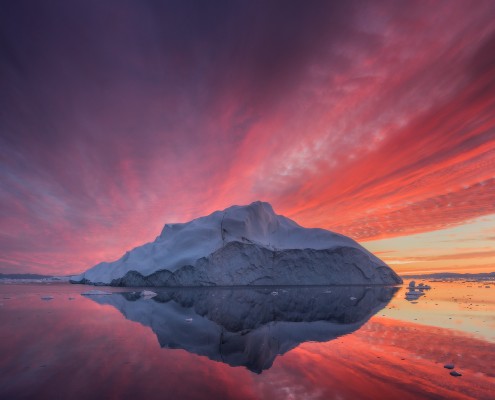 We are sailing towards Constable Point airport to get you off-shore and continue by our airplane charter to Reykjavik.

The full list will be sent by mail to participants. 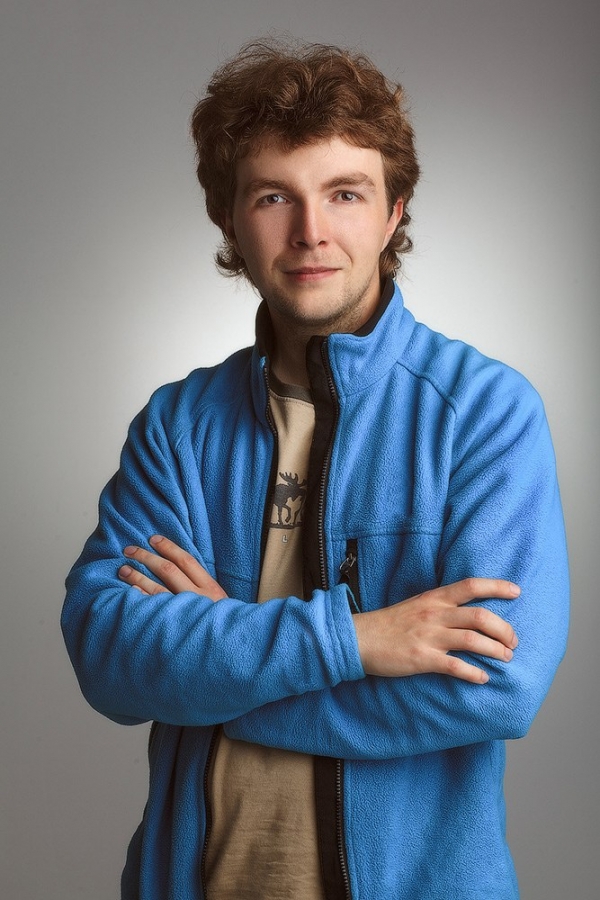