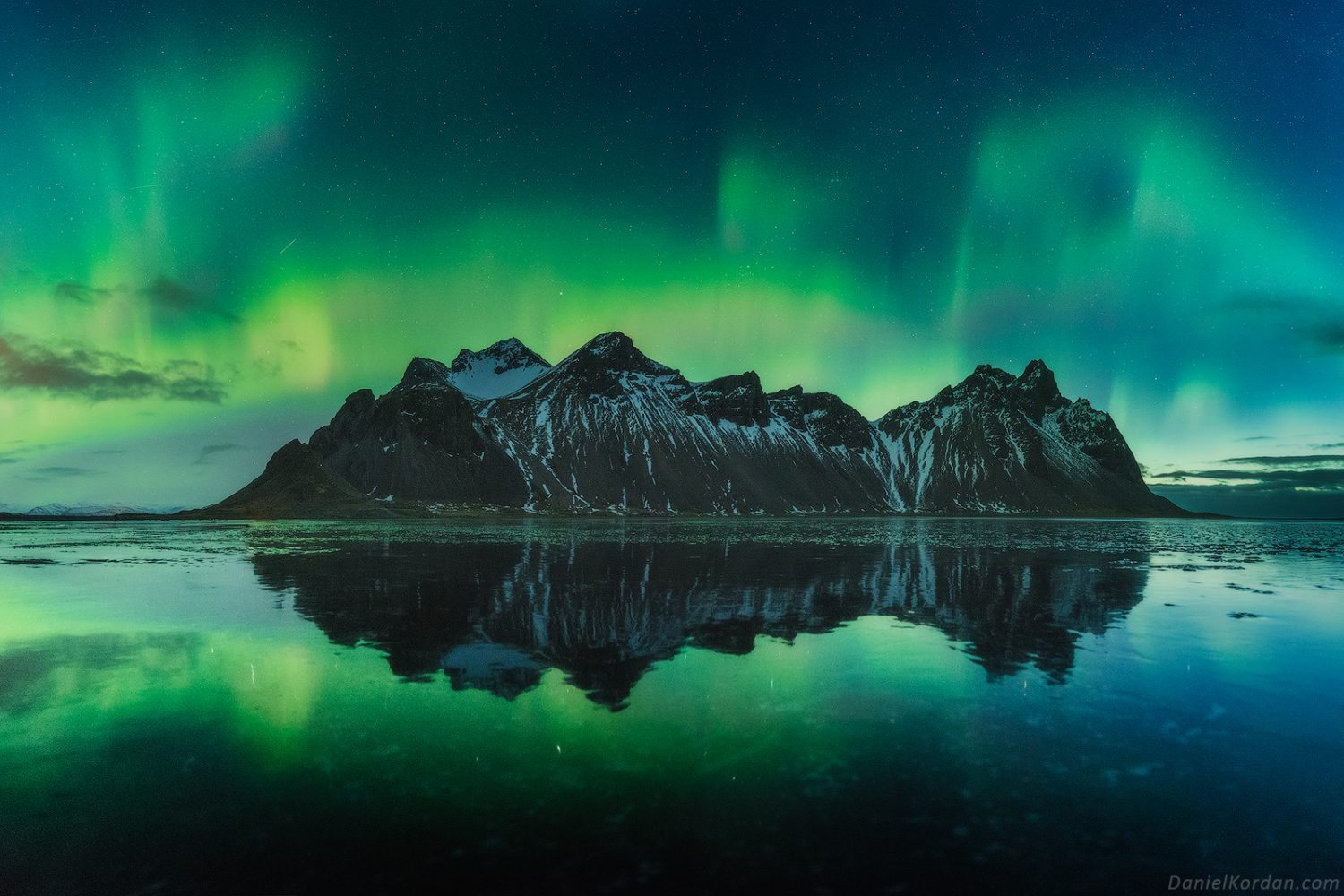 The Aurora and Ice Caves Photo Workshop is our most popular tour for a reason. This is a photography adventure like no other, exposing you and your camera to the very best sights that Iceland has to offer. We will chase the northern lights, explore spectacular ice caves, capture the magical glacier lagoon at Jokulsarlon and witness much more besides. This winter tour has it all.

Across eight memorable days we will take in the landscapes and light conditions that have made Iceland one of the world’s premier photography destinations. We’ve got professional photography guides, a crazy amount of local knowledge and a welcoming country ready to explore. So what are you waiting for? Grab your gear; an Arctic paradise awaits!

This winter photography tour in Iceland is:

Day one begins with your arrival at Keflavík International Airport; you will take a Flybus, using the ticket provided for you, to your hotel in Reykjavík, where you are free to unwind until 7 pm. At this point, you will meet your guides and group in the lobby, and head to an esteemed restaurant for a delicious dinner. Over the meal, you’ll get to know the people you’ll be spending the next week with and run through the itinerary of the adventure ahead. No doubt full, satisfied, and eager to get on with the photography workshop, you’ll retire to your hotel for the night. 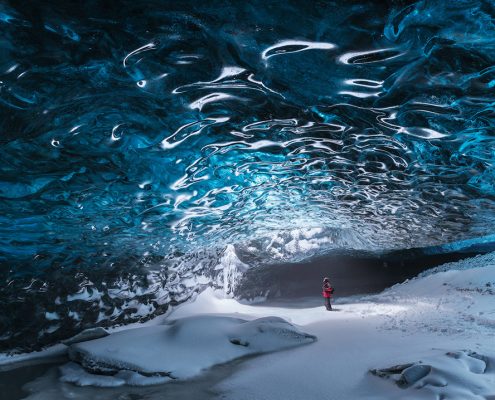 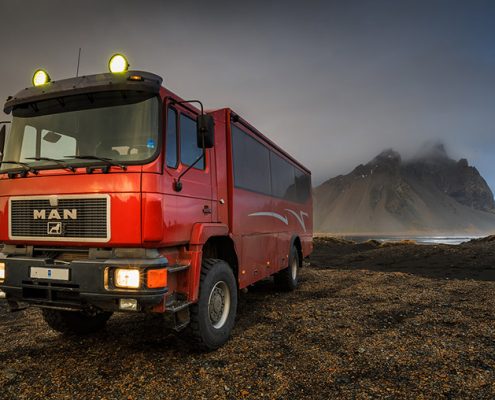 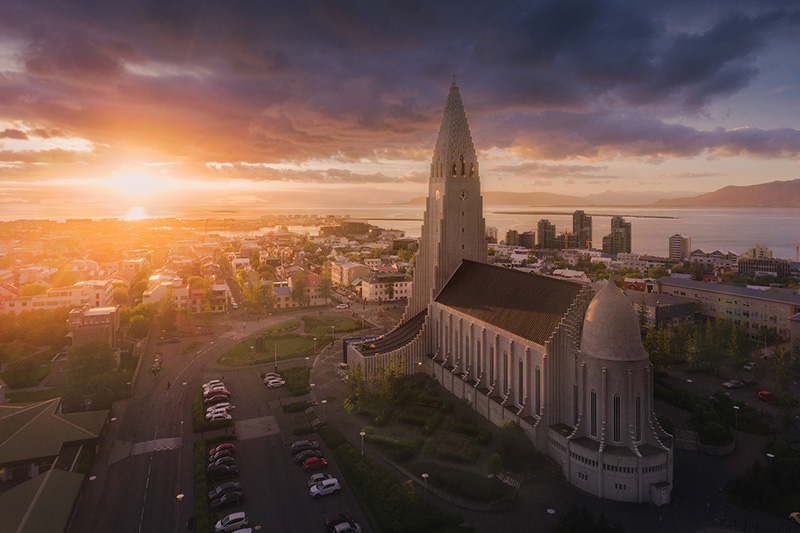 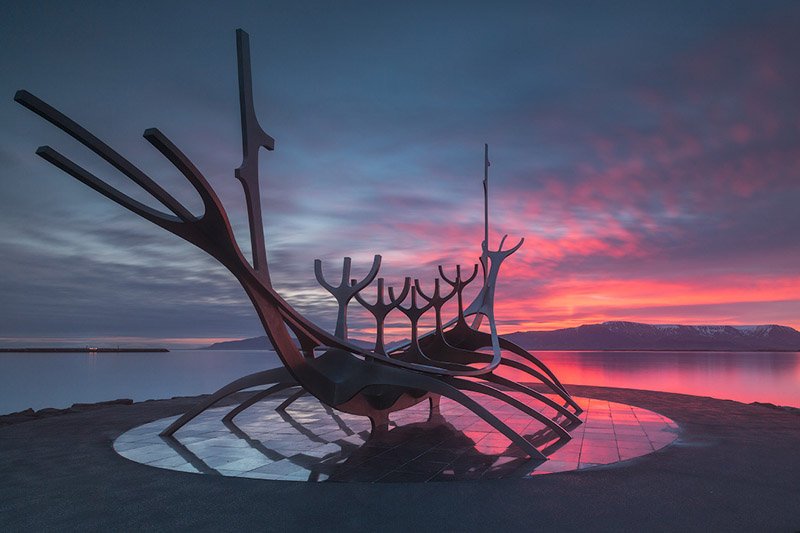 On your second day, the adventure truly begins. You’ll gather in a specialized, comfortable bus, and set off on your journey along the South Coast.This stretch is one of Iceland’s most popular tourist routes, and why will become apparent very quickly; the main road is lined with fascinating features, great for sightseeing but even better for photography.

Your first subjects will be two of the country’s most famous attractions, the waterfalls Seljalandsfoss and Skógafoss. The former stands at 63 meters tall, and falls in a narrow cascade in front of a cavern; if the path is clear, you will be able to walk behind it and photograph the water from a unique angle.Skógafoss has no cavern behind it (outside of legend, where there is said to be a trove of hidden treasure), but is much more dramatic than Seljalandsfoss. Though the same height, it is wider and more powerful, thundering to the earth and throwing off clouds of spray.

If the sun is shining, rainbows arch throughout the mist, allowing you to practice working with unusual lighting phenomena; this will come in handy for your northern lights photography throughout the tour.After capturing these waterfalls, you will continue along the South Coast to the black-sand-beach Reynisfjara for your sunset shoot. This magical stretch of coastline was once voted amongst the most beautiful non-tropical beaches in the world, and your photographs will tell the story as to why.

The main subjects from Reynisfjara beach are the Reynisdrangar sea-stacks. These two basalt columns rise from the tumultuous ocean, 66 meters tall at the highest point, and are, according to folklore, the petrified remains of two trolls caught in the morning sun trying to pull a ship into shore.Though this is a fantastic photography location (especially if the northern lights make an appearance towards the end of your shoot), Reynisfjara beach has notorious sneaker waves, so ensure you don’t get so absorbed in the area’s beauty that you put yourself at risk. You will spend your second night at accommodation in the nearby, charming village of Vík. 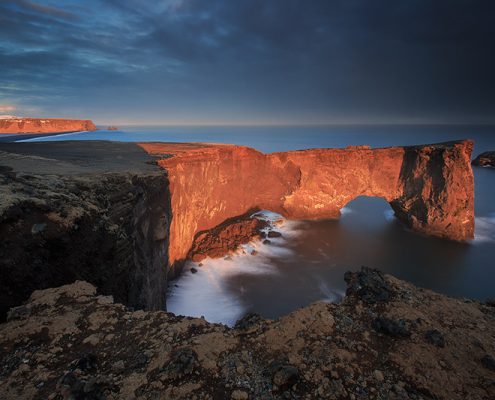 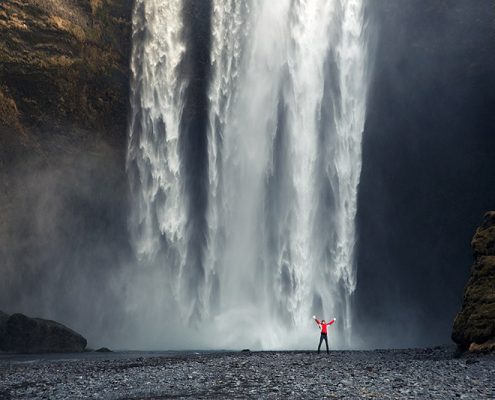 On day three, you will continue along the South Coast until you reach Vatnajökull National Park, a vast area that contains many of Iceland’s greatest subjects for photography. You’ll spend several days in this diverse region.

You can expect a range of subjects throughout the first part of this day, including lava landscapes, glacier tongues, waterfalls and desert-like stretches of black sands. The second part of the day will be focused on one location in particular, however: the mesmerizing Jökulsárlón glacier lagoon.

Jökulsárlón is often spoken of as ‘the crown jewel of Iceland’s nature’, due to its unreal beauty. Here, vividly blue icebergs break from the retreating glacier tongue Breiðamerkurjökull, some towering high above the water, and slowly cruise across the lake towards the ocean. Each one is unique and makes for a fascinating subject.

Other than capturing the bergs and surrounding landscapes, you can use your time at Jökulsárlón to practice your wildlife photography. Many seals call the lagoon home, and can be captured either swimming in the azure water or else hauling out on the ice.

Adjacent to Jökulsárlón is the Diamond Beach, named as such for the fact the icebergs, when they finally free themselves from the lagoon, tend to wash up on the black sands here. Photographing the contrasts between the ice, sands, and surf will result in some beautiful images.

You will retire for the night in the Jökulsárlón area, but will hopefully be able to enjoy a northern lights photography session over the lagoon or beach, conditions allowing. If not, do not worry, as there will be more opportunities to do so over the next two days. 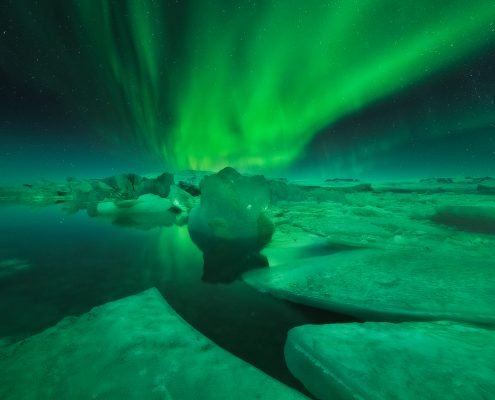 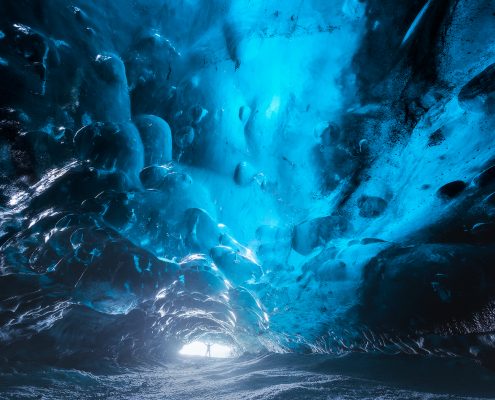 Your sunrise shoot on day four will be conducted back at Jökulsárlón; this beautiful area changes under different lighting conditions, so you’ll be able to capture some unique images while working on your landscape photography. You will also head back to the Diamond Beach for another shoot here.

Your main focus for the day, however, will be ice cave photography. Ice caves are only accessible from very few places in the world, and even then only at certain times of the year under specific conditions. The chance to explore one is an incredible, rare opportunity, and the chance to shoot within one with expert photoguides even more so.

The ice cave you will explore will be beneath Europe’s largest ice cap, Vatnajökull glacier. The otherworldly blues, deep tunnels and unusual formations within the cave will help make for some awe-inspiring photographs, which tell the story of the wonders to be found here.

You’ll spend another night in the Jökulsárlón area, with the hopes that you will get a chance (or, preferably, another chance) to practice your northern lights photography. 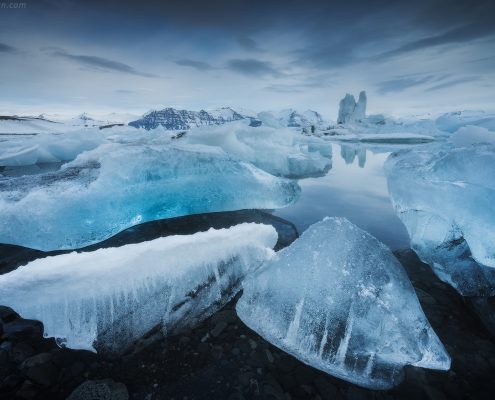 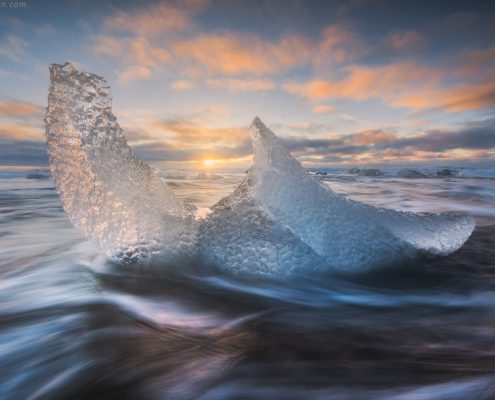 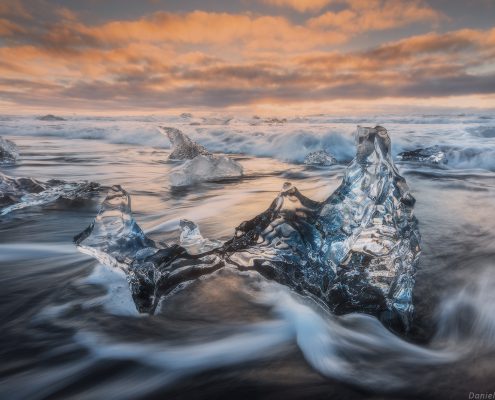 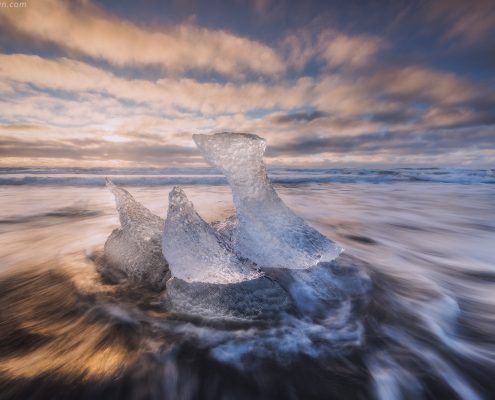 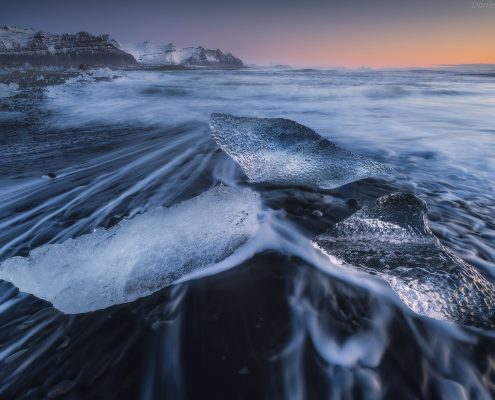 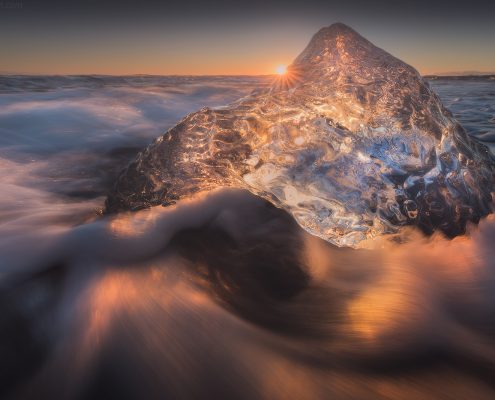 On day five of this winter photography expedition, you’ll have a sunrise shoot at the Diamond Beach. Following that, you will head even further east along Iceland’s South Coast, out of Vatnajökull National Park, to Vestrahorn mountain on the Stokksnes Peninsula.

This feature is often called ‘the Batman mountain’ due to its ‘horned’ twin peaks, and it is a favorite subject amongst landscape photographers.

The dramatic, imposing mount is surrounded by ominous black sands, allowing you take pictures revealing the stark, barren and often haunting nature of Iceland’s landscapes. There are several angles you can picture it from, which may also include the churning Atlantic Ocean.

You will stay here throughout the sunset when Vestrahorn becomes shadowy and even eerier. As night falls, you can hope once more to capture the northern lights, this time with the mountain as your foreground.

After a day of shooting at Vestrahorn, you’ll return to your accommodation. Of course, if the auroras are dancing when you return, you’ll visit Jökulsárlón to capture them. 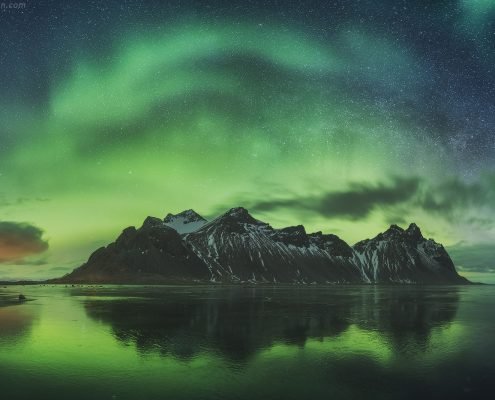 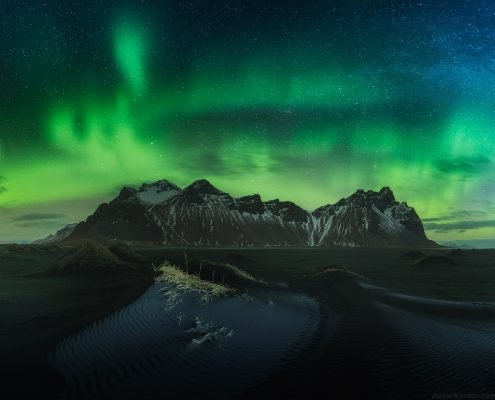 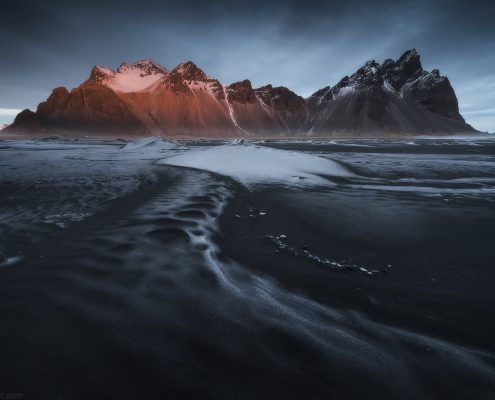 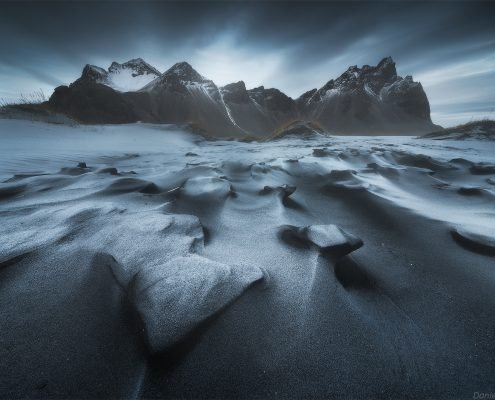 On your sixth day, you will visit the spectacular Skaftafell Nature Reserve. This area is so beautiful it was once a National Park in its own right before the newly formed Vatnajökull National Park absorbed it.

You will spend the majority of the day shooting its many sites, continuing to practice your landscape photography; by this time in the tour, you will no doubt notice a marked improvement in your skills. Your subjects will include glacier tongues and lagoons, mountains, ice caps, forests, river systems and waterfalls.

After capturing the magic of this beautiful reserve, you will head back to the South Coast, returning to Reynisfjara beach for another sunset shoot. If the Northern Lights did not show the first time you were here, you can hope they will tonight.You’ll retire at accommodation in Vík. 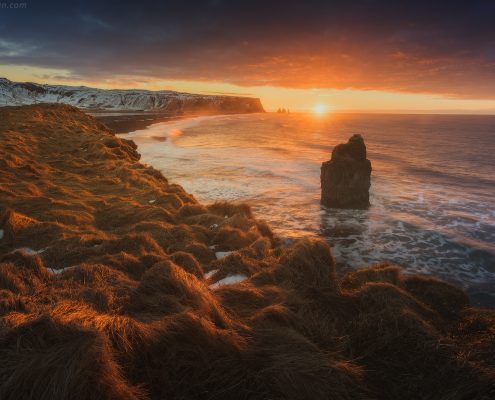 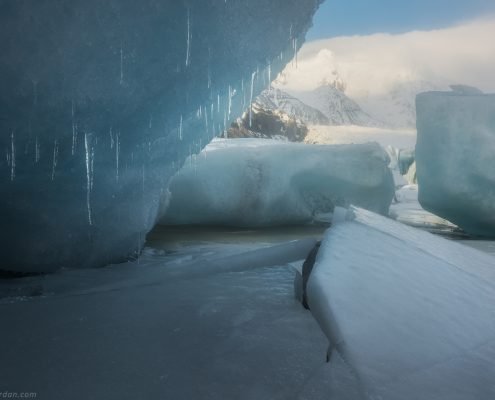 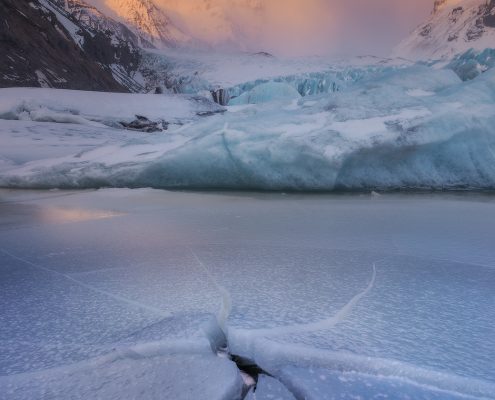 Day seven is your final full day of photography, and you will spend it shooting three of Iceland’s most famous sites: Þingvellir National Park, the Geysir Geothermal Area, and Gullfoss Waterfall, all on Golden Circle Route.

Þingvellir is the only UNESCO World Heritage Site on the Icelandic mainland, being where the early residents formed their first parliament in 930 AD. While the history of this place is inspiring, it is the landscapes that you are likely to find most captivating.

Located in a valley between the tectonic plates, you can shoot the walls that mark the edges of the continents, the lava fields that fill the area from eruptions in centuries past, and the many ravines filled with crystal clear spring water, opened by earthquakes in the area. Iceland’s largest natural lake, Þingvallavatn, also makes for a beautiful subject with its surrounding mountains.

The Geysir Geothermal Area is the prime location on this photo workshop to photograph Iceland’s seething geothermal activity. The area is dotted with many fumaroles, hot springs and mud-pots, the earth is vividly colored by the elements rising from the crust, and, of course, there are geysers on site.

The largest of these, Geysir itself, is inactive, but you will have plenty of chances to shoot Strokkur, which erupts every five to ten minutes to heights which exceed twenty meters.

Your final subject on this workshop will be one of Iceland’s most recognizable and renowned sites: Gullfoss waterfall. This incredible feature, the name of which translates to the ‘Golden Waterfall’, is immensely powerful, thundering in two tiers into a dramatic, ancient canyon. There are several platforms from which you can capture it.

In winter, the rocks around Gullfoss are caked in ice, and snow covers the surrounding landscapes. In cloudy weather, therefore, your photographs can tell the story of the waterfall’s ominous strength, whereas when the sun is shining, and rainbows are cutting through its spray, they will depict how much of a winter wonderland Iceland can be. With any luck, you will finish your shoot with the northern lights overhead. You will then return to Reykjavík for your final night. 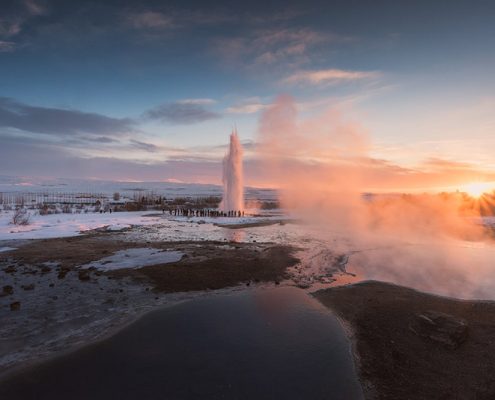 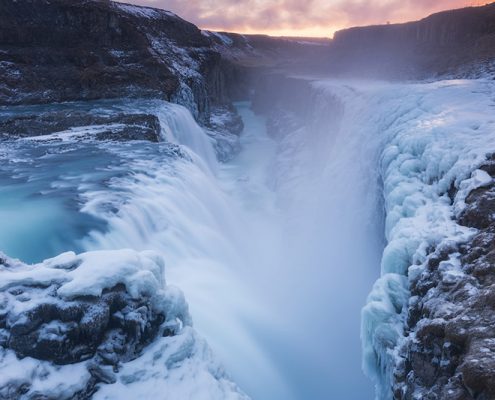 Sadly, the tour ends on day eight. When it is time to hop on the Flybus back to the airport, however, the bittersweetness of departing will hopefully be outweighed by the pride taken in your developed skills, gratefulness for the chance to participate in northern lights and ice cave photography, and awe from the pictures you have taken. 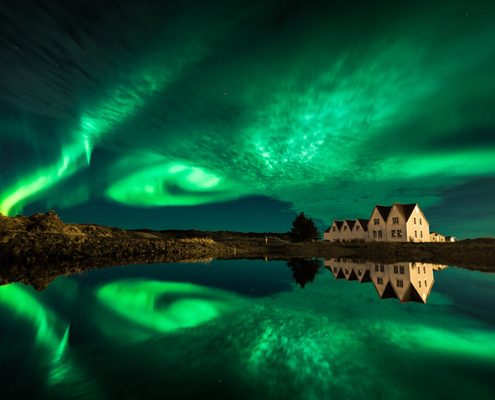 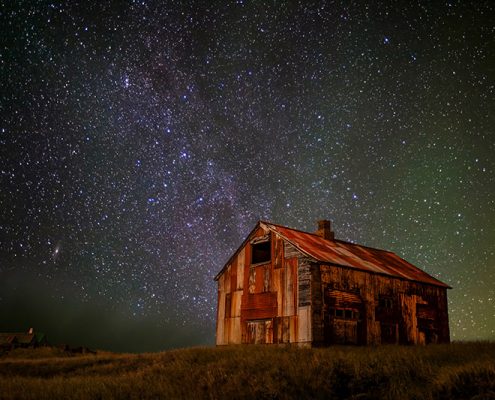 The tour is always dependent on weather, as the Icelandic weather can indeed be highly unpredictable. Likewise, visits to ice caves are dependent on favorable conditions, and indeed the ice caves themselves are not permanent. When it comes to the Northern Lights, while they are most likely to be seen between September and April, there is no guarantee that they will appear on a given day.

All our shooting locations are easily reachable during 1 to 10 minutes from the car. We will not climb or hike on this tour. You must be prepared for winds and cold weather. Some sessions may last up to 2-3 hours with the possibility to warm up in the car from time to time.