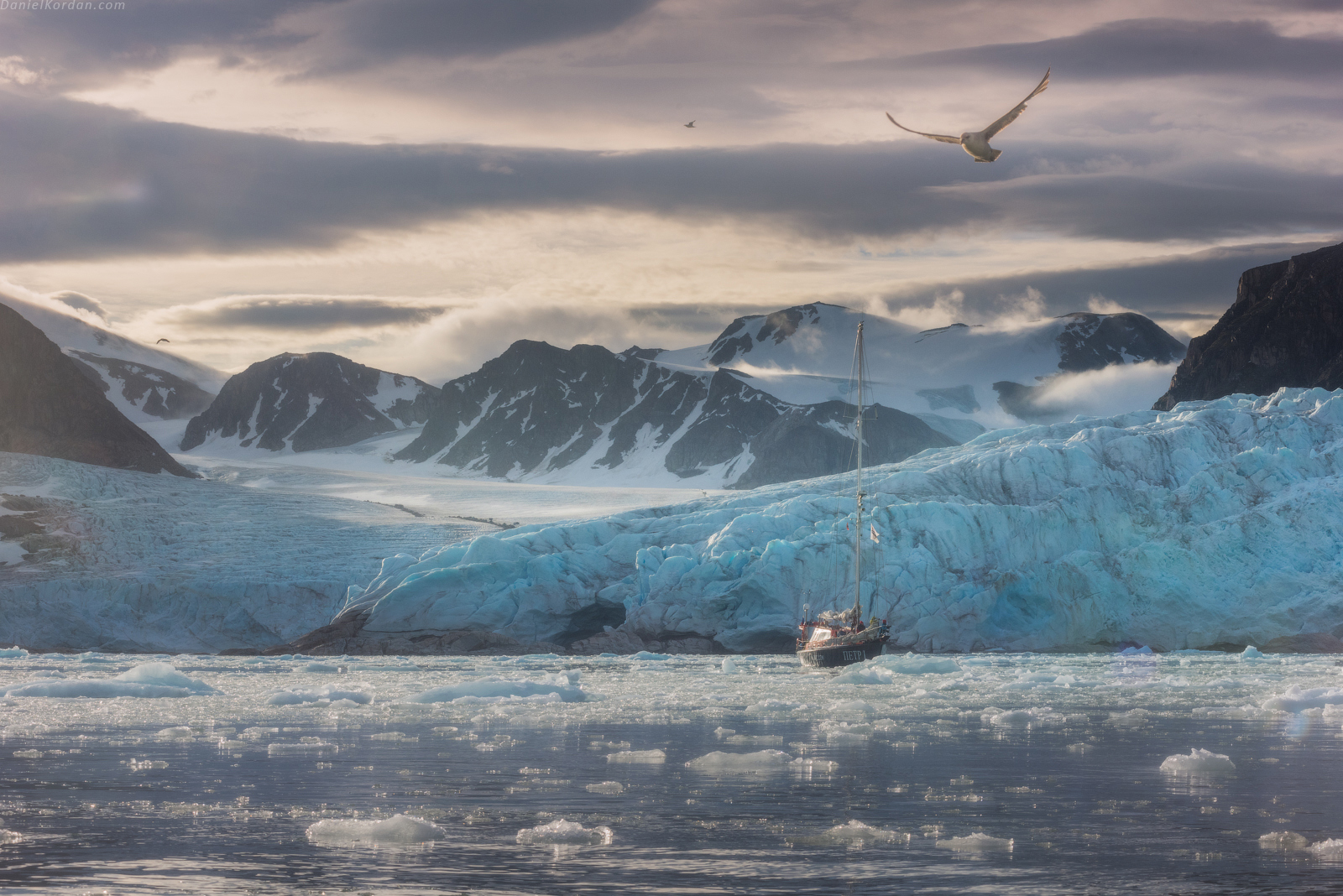 In September 2017 we go on photography expedition to Spitsbergen. It’s an unforgettable 11-days trip across the Arctic together with a small team of 12 photographers. We’ll focus on animal kingdom and on the beautiful arctic landscapes. Spitsbergen means deep fjords, peaks’ snowcaps, glaciers and of course polar bears. We’ll search for the most interesting scenes taking into account ice situation. Probably there is no better case for shooting than a small team, 11 days at sea together with experienced sailors in a constant search of beautiful scenes.

We chose September dates not randomly: first sunset happens at Svalbard in September! So we’ve planned the most amazing Arctic light journey! All the summer long the light is worst possible: sun will be far above horizon all the night long. The archipelago is situated far beyond the Arctic Circle between 74° – 81°N , so the sun sets first time only in September. You’ll get the best light possible all the night long!

The advantages of travelling by the private ship are obvious: we are more mobile and we can listen to every participant’s opinion what is difficult in a team of 30-50 people on board. The big ships can scare away the animals and can’t be as mobile as we are. Moreover, we have a quick and maneuver “Zodiacs” which can be launched at any moment to get closer to the animals or to go ashore. Everyone can fit 2 Zodiacs simultaneously. Safety measures’ questions are paid special attention: satellite phone, navigational system, ice maps and guide team arming (fires, rifles).

Our timetable is more or less free. Ideally we want to go to North Spitsbergen (as we always do) but that’s not the main goal. The main goal is to make beautiful shots of the Arctic, especially animals’ kingdom and landscape. One of the main goals is to shoot a polar bear. We’ll see fur seals, whales, walruses and arctic foxes for sure. That’s why we’ll work out our everyday timetable taking into account ice situation and the weather. If we see an animal we’ll try to study it and observe, so it’s very desirable to take telephoto with you. 500 mm, 600 mm lens will be right for a close-up and 300 mm, 70-200 for a long shot and an extender.

SAS fly regularly to Longyearbyen through Oslo and Tromso. You are recommended to arrive to Spitsbergen at 14:00 approximately the day before and check in to hotel. We will welcome you at the dinner together. Recommended hotels:

Radisson Blu Polar Hotel is one of the biggest hotels and moreover is well-placed.

M/S Malmö owners, captains and crew have several years of experience from Svalbard and is actively working to make responsible expeditions that respect the fragile environment. Vessels route on the expeditions depends on ice, weather conditions and wildlife encounters, but also on what group that is on board. The ship’s Master is always the one who decides when and where the ship will sail and when it is appropriate to put passengers ashore. Below are some examples of the places we usually visit during our expeditions.

Day 1-9: Arrival in Longyearbyen and boarding the Ship in the afternoon

We are now in a part of the world where natural forces rule. Our exact itinerary depends on weather, ice conditions and the wildlife we encounter on the road. Every day we plan to make landings by Zodiac and the following are just examples of some of the exciting places we might visit. 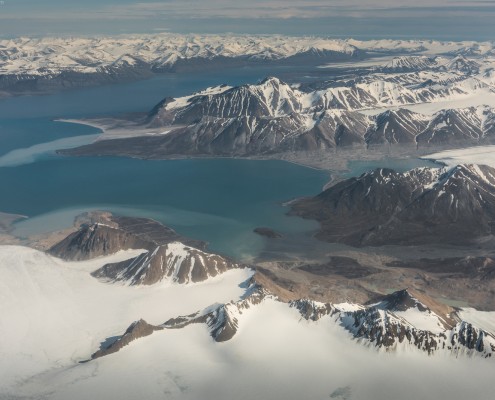 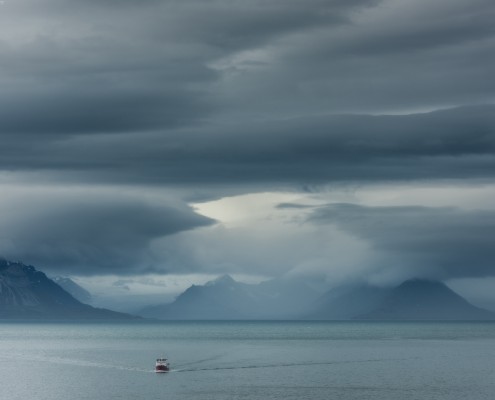 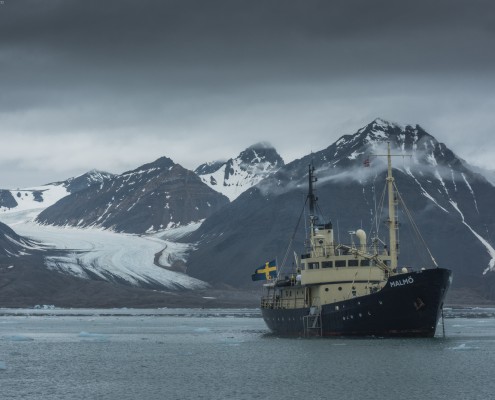 Svalbard offers a variety of scenic fjords, such as Liefdefjorden, Krossfjorden and Raudfjorden. Here stretches beautifully sculpted glaciers out and seals and walrus are often resting on ice floes In Kongsfjorden, considered by many as Svalbard’s most beautiful fjord, we find Ny Ålesund. a small village with about sixty scientists doing all kinds of research and here we also find the World ́s northernmost post office. From this place Amundsen and Nobile started their courageous attempts to reach the North Pole. We visit the monument commemorating these heroes and learn more about their fascinating adventures.

North of Spitsbergen we might meet the pack ice. Not many ships come here and we enjoy the tranquility of this grand ice landscape. Sailing in ice increases the chances of meeting polar bears and we are of course constantly scouting the area. If the weather and ice situation permits, we may sail into Hinlopen Strait and in good conditions, we reach Alkefjellet, a spectacular basalt cliff, which is a breeding place for some 200 000 guillemots. Nordaustlandet is an impressive island that is covered by an enormous ice cover. This mile-long glacier front with huge melt water cases, fascinates nature and history enthusiasts.

A bit east of Nordaustlandet is White Island. If luck is on our side, we might reach this place where only a few people have set foot. It was here Andrée and his men were found 33 years after their failed ballon expedition to the North Pole 1897.

Barentsøya and Edgeøya south of Nordaustlandet offer magnificent scenery with vast tundra plains. Here we have a good chance to see both the walrus, arctic fox and Svalbard reindeer.

The most famous kind is a Polar bear who is the biggest predator in the world. The population of the bears is from 3000 to 4000 animals here. On the South and West shores there are vast rookeries of sea animals – fur seals, seals and walruses and the smallest Polar deer – Svalbard deer can be seen almost everywhere. But the real king and owner of Spitsbergen is of course a Polar bear. It’s a powerful animal weighing up to 900 kilos which doesn’t know equals. 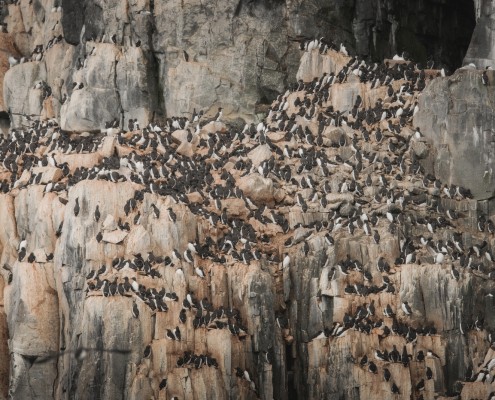 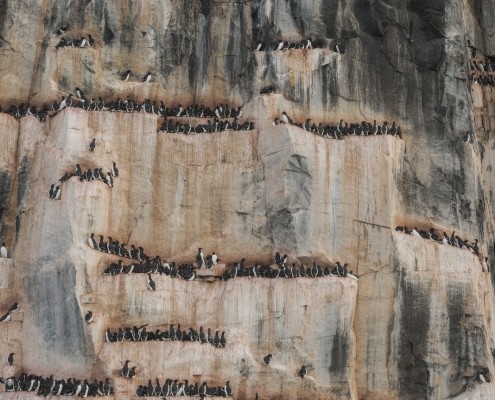 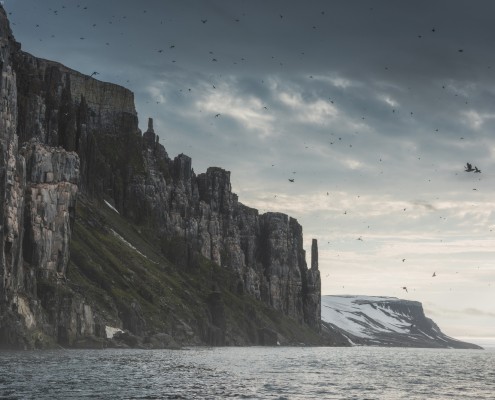 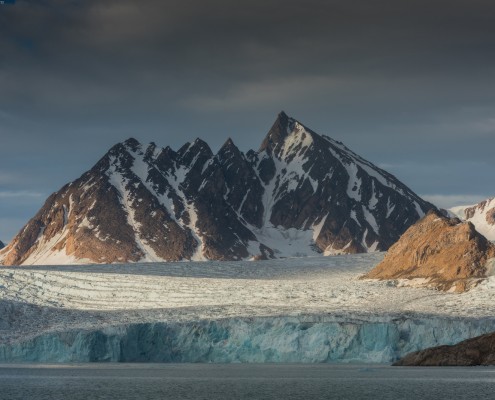 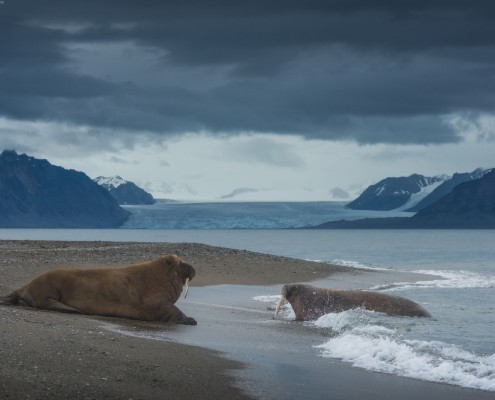 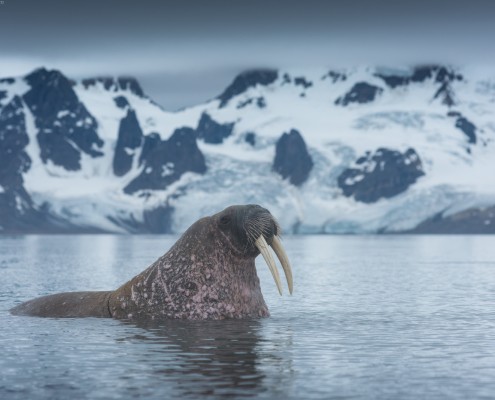 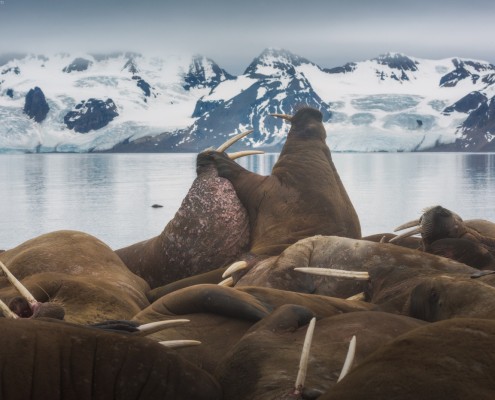 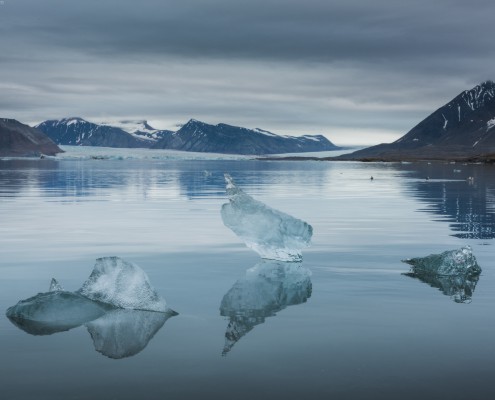 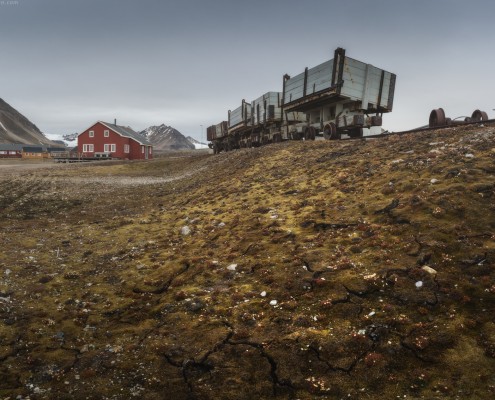 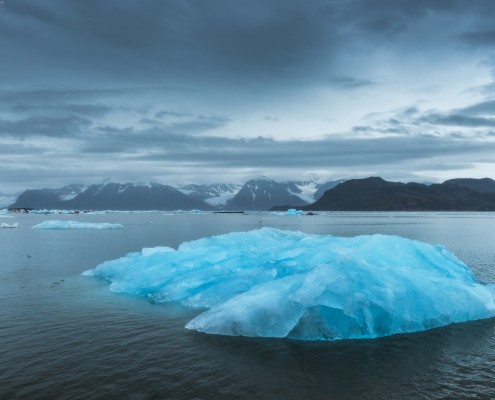 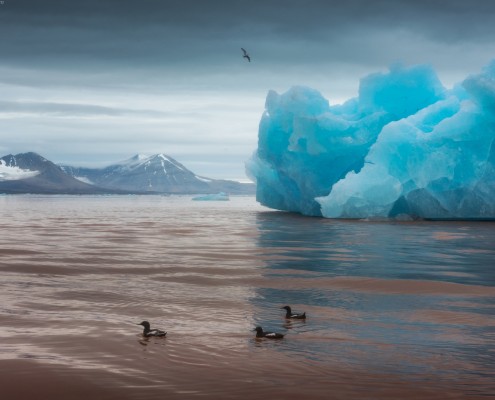 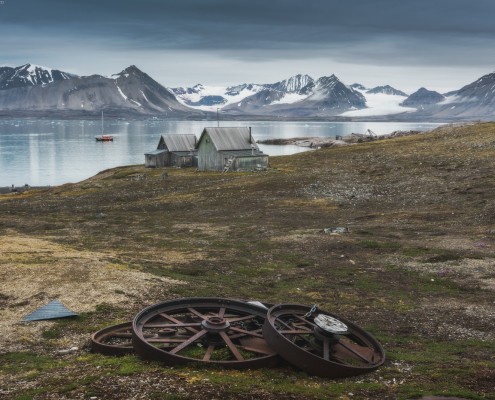 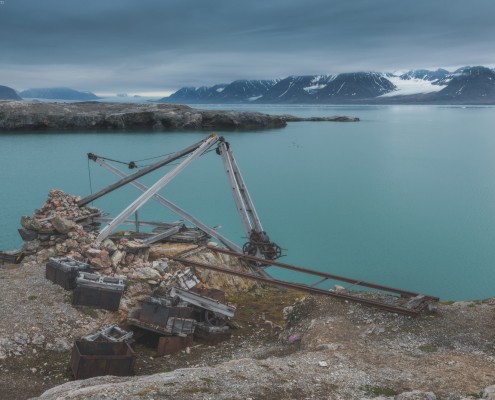 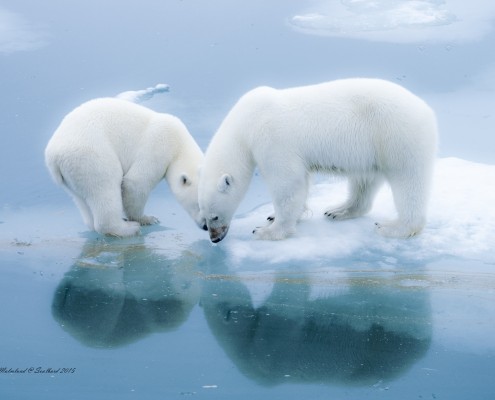 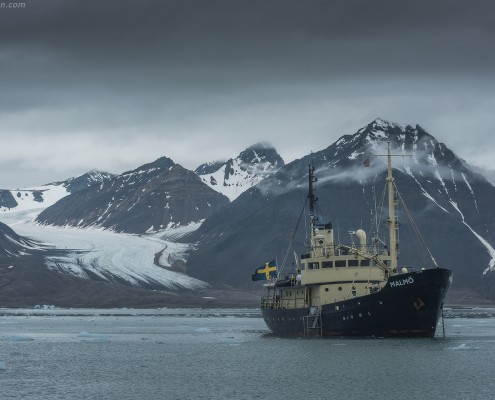 During the night we reposition to Longyearbyen and early in the morning we leave the ship and begin the journey home. 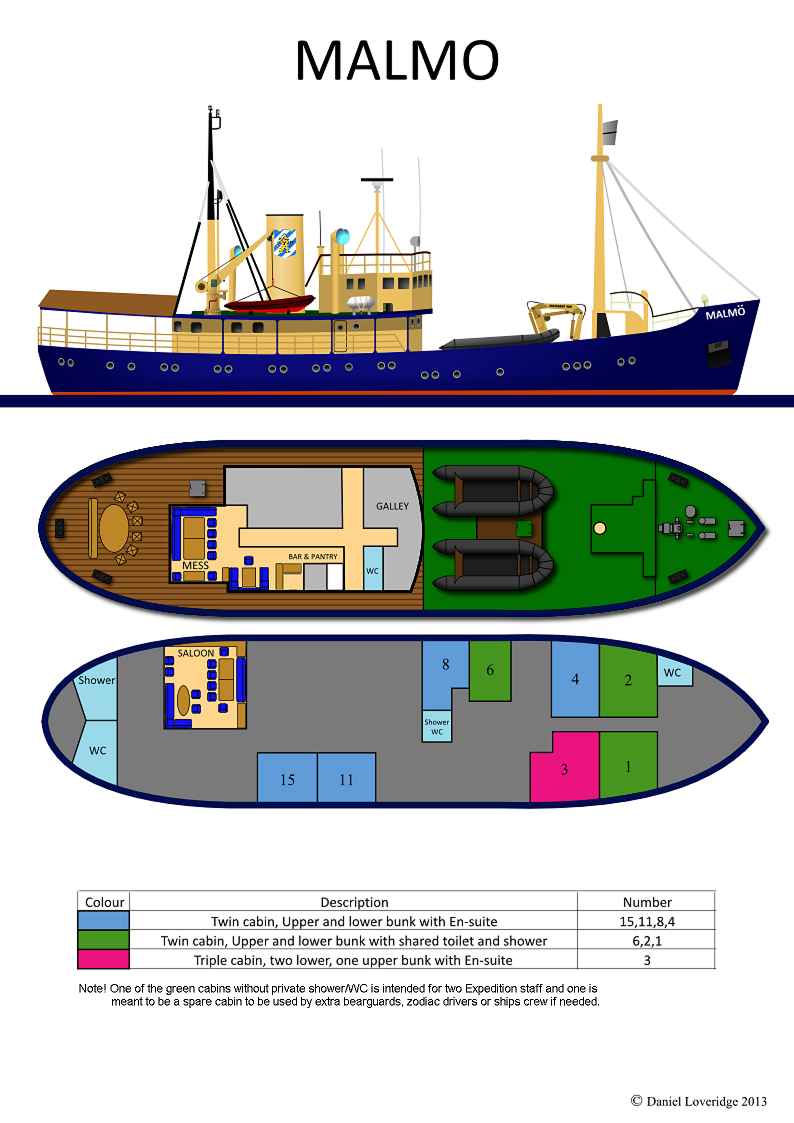 One lower and one upper berth, a bathroom with a shower, WC, a sink and illuminators.

№ 6 single cabin without facilities has

One lower and one upper berth, a sink, illuminators and WC close by

The main accommodation on board is a double cabin with facilities. All cabins have upper and lower berths. 5 out of 6 cabins have WC and a shower. There are also single and triple cabins. For more details see cabins and prices. European cuisine is tasty and various on board. You can always have tea, coffee and drinks from the bar.
Price:
10500 USD double/twin with shared facilities (6,2,1)
11500 USD double/twin with private facilities (4, 8, 11, 15)
9500 USD triple with private facilities (3)

*If the cost of fuel rises extremely in Longyearbyen, additional costs may arise – usually it’s no more than $250-350 per person.

The full list of wear will be sent to participants. 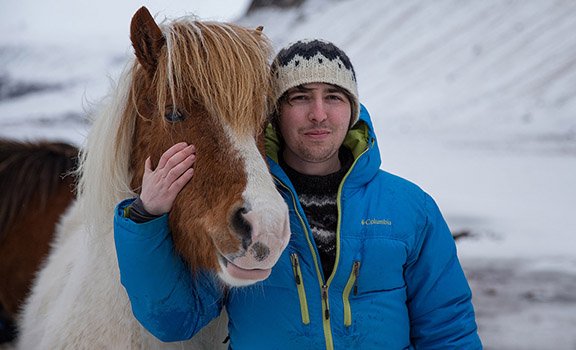 Iurie Belegurschi is a landscape photographer based in Iceland, where he runs photo tours and workshops. He was born in Moldova and has been living in Iceland since 2006. He has a Bachelor’s degree in Tourism and Hospitality. His photos have been published worldwide in books, calendars, greeting cards, magazines and some of the most popular newspapers like The Daily Mail, The Independent, The Sun, The Huffington Post, and The Telegraph